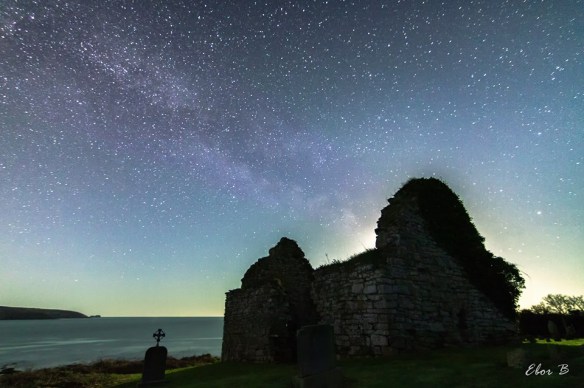 “To hear never-heard sounds,
To see never-seen colors and shapes,
To try to understand the imperceptible
Power pervading the world;
To fly and find pure ethereal substances
That are not of matter
But of that invisible soul pervading reality.
To hear another soul and to whisper to another soul;
To be a lantern in the darkness
Or an umbrella in a stormy day;
To feel much more than know.
To be the eyes of an eagle, slope of a mountain;
To be a wave understanding the influence of the moon;
To be a tree and read the memory of the leaves;
To be an insignificant pedestrian on the streets
Of crazy cities watching, watching, and watching.
To be a smile on the face of a woman
And shine in her memory
As a moment saved without planning.”
― Dejan Stojanovic

Pic from Ebor Benson Photography:”Last nights milky way on the rise, battled against the moonlight to capture this.” 30th March 2016

BEHOLD the Lightener of the stars
On the crests of the clouds,
And the choralists of the sky
Lauding Him.

Coming down with acclaim
From the Father above,
Harp and lyre of song
Sounding to Him.

Christ, Thou refuge of my love,
Why should not I raise Thy fame!
Angels and saints melodious
Singing to Thee.

Thou Son of the Mary of graces,
Of exceeding white purity of beauty,
Joy were it to me to be in the fields
Of Thy riches.

O Christ my beloved,
O Christ of the Holy Blood,
By day and by night
I praise Thee.

St Columba  (Colm Cille, ‘dove of the church’) ;was the sixth century Irish missionary  credited with spreading Christianity in  what we now call Scotland. Importantly, he also founded  Iona, which became a dominant spiritual centre for centuries to come. He is one of the Twelve Apostles of Ireland.

Around 563, as the picture indicates,  he and his twelve companions crossed from Ireland to Dunaverty near Southend, Argyll in Kintyre before settling in Iona in Scotland, then part of the Irish kingdom of Dál Riata, where they founded a new abbey as a base for spreading Christianity among the pagan picts.

Here’s a lovely clip of some early medieval Latin hymns which are often attributed to him.

And environmentalist?  He is credited with the statement:  “He who tramples on the world tramples on himself” which resonates (with me at least!) of the need of our society to heed the Celtic call to rediscover both the real value of self and the real value of our lovely planet, within the framework of an awareness of the Divine. 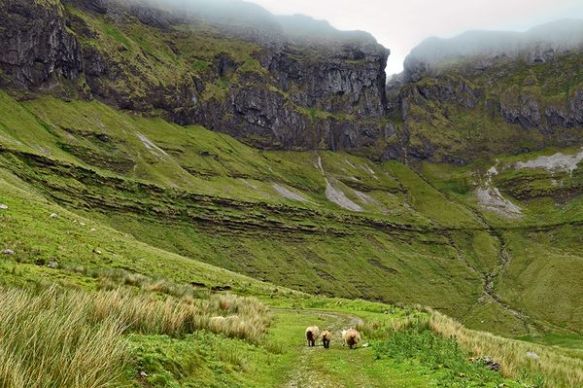 Every time you leave home,
Another road takes you
Into a world you were never in.

New strangers on other paths await.
New places that have never seen you
Will startle a little at your entry.
Old places that know you well
Will pretend nothing
Changed since your last visit.

When you travel, you find yourself
Alone in a different way,
More attentive now
To the self you bring along,
Your more subtle eye watching
You abroad; and how what meets you
Touches that part of the heart
That lies low at home:

How you unexpectedly attune
To the timbre in some voice,
Opening in conversation
You want to take in
To where your longing
Has pressed hard enough
Inward, on some unsaid dark,
To create a crystal of insight
You could not have known
You needed
To illuminate
Your way.

When you travel,
A new silence
Goes with you,
And if you listen,
You will hear
What your heart would
Love to say.

A journey can become a sacred thing:
Make sure, before you go,
To take the time
To bless your going forth,
To free your heart of ballast
So that the compass of your soul
Might direct you toward
The territories of spirit
Where you will discover
More of your hidden life,
And the urgencies
That deserve to claim you.

May you travel in an awakened way,
Gathered wisely into your inner ground;
That you may not waste the invitations
Which wait along the way to transform you.

May you travel safely, arrive refreshed,
And live your time away to its fullest;
Return home more enriched, and free
To balance the gift of days which call you.

~ John O’Donohue, ‘To Bless the Space Between Us‘

Like the joy of the sea coming home to shore,
May the relief of laughter rinse through your soul.

As the wind loves to call things to dance,
May your gravity by lightened by grace.

Like the dignity of moonlight restoring the earth,
May your thoughts incline with reverence and respect.

As water takes whatever shape it is in,
So free may you be about who you become.

As silence smiles on the other side of what’s said,
May your sense of irony bring perspective.

As time remains free of all that it frames,
May your mind stay clear of all it names.

May your prayer of listening deepen enough
to hear in the depths the laughter of god.”
― John O’Donohue, To Bless the Space Between Us 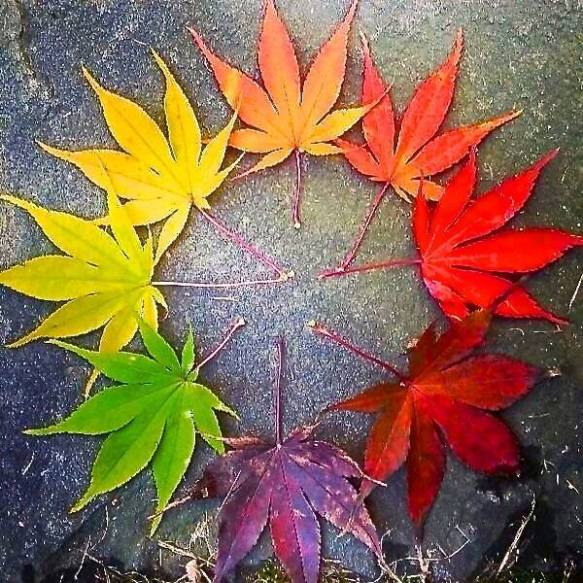 May you always find the best within all people;
may you continue to learn throughout your life;
may your word be trusted by all you meet.

May you search for the similar within the separate;
may you show compassion; may your sacrifices benefit others;
may you be diplomatic when it is most difficult.

May you always remember you were loved before you were born;
may the transitions of your life ripple on the pond of time into the future;
may your journey come to exemplify the Celtic Circle. 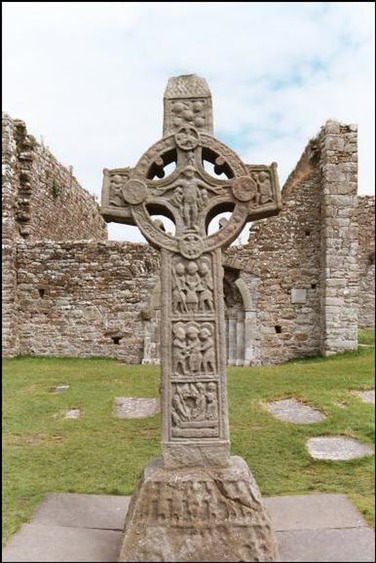 The High Cross at Clonmacnoise stands an impressive four metres tall, built of Clare sandstone around 900 AD.  The scenes depicted upon it are sometimes difficult to decipher and this has given rise to many alternative explanations.

There are two aspects, however, which are beyond dispute, and declare with a timeless eloquence the central paradox of Celtic Christology: that of the suffering and the glory of Christ.  On this face (above), the central figure is the crucified Christ. The usual explanation of the four roundels (at 12, 3, 6 and 9 o’clock), are the four gospels, pictorialized as lion, ox, eagle and man as the various metaphors explaining aspects of  Christ’s life and ministry (and/or of the gospel writers).

Here’s a detail of the central scene:

Peter Harbison writes “Christ, represented as if wearing a short trouser-like garment and with his legs bound, is shown with his outstretched arms falling at an angle and with his large hands bearing the nail heads in the centre of the palms.”  (Harbison 1992, 52)

There are other interesting features in this scene.  The figures to the left and right of Jesus are traditionally identified as Stephaton (left), who offers Jesus vinegar on a pole and  Longinus (right) who stabs Jesus with a lance.  Stephaton and Longinus appear (unnamed)  in the passion story in the Gospel of John 19:28-34.

On the reverse face, the center of the head of the cross and the arms form one integrated scene.  This is clearly a portrayal of Christ in glory and judgement.

It’s as if the very emblems of his humiliation have become the badges of office as He rises, rules and reigns in power.

What is the sermon the High Cross is intending to preach?

It’s a declaration of the two sides of Christ and how one aspect teaches the other. If there was only a depiction of power and glory then one would be left with a triumphalist, omnipotent god bent on conquest and ruling in total authority.

That’s true, of course, but only partly so.

If there was only a depiction of suffering and death, then one might be left with the notion that pain and sorrow was the end of the story, or that they were somehow redemptive and valuable by themselves.

Again, there is a sliver of truth here, but both sides have to be brought together.

This is how the apostle John approached the paradox: he began his gospel with an account of the glory of God in creation and revelation but then said “And the word was made flesh and dwelt among us. And we beheld His glory.” We behold the glory of God “made flesh”.

Yet it was a strange sort of glory, and many who saw and heard him perceived no glory at all. What is striking about John`s presentation is that, although his glory was manifested powerfully in his miracles or “signs”, it was above all to be seen in his present human weakness, in the self-humiliation of his incarnation.

As He came in lowliness we have an example of the paradox that John uses so forcefully later in the Gospel, that the true glory is to be seen, not in outward splendour, but in the lowliness with which the Son of God lived for men and suffered for them.

This becomes especially clear from the way in which John links glory with the cross. We may not be as surprised at this as we should be, since our awareness of the splendour of Christ`s accomplishment at Calvary can cast over his cross a cloak of spurious sentiment and so obscure something of its horror. But a horror it was to the first century world, a place of unspeakable agony, and, above all, of shame and curse. To explain the paradox was, indeed, a great part of John`s purpose in writing the gospel. Part of his goal, in writing an evangelistic book for Jews and proselytes, is to make the notion of a crucified Messiah coherent. The intrinsic offense of the cross he cannot remove. What he can do is to show that the cross is at one and the same time nothing less than God`s astonishing plan to bring glory to himself by being glorified in his Messiah.

But what do we do with the paradox? What should our reaction be?

As we come to Easter, those two aspects come into their sharpest focus. The cross at Clonmacnoise reminds us that Good Friday and Easter Sunday belong together, to speak out the one gospel of the living Christ.

This book is a study of the spirituality of Patrick through his own writings, the Confession and the Letter. It is shaped as a series of thirty meditations which may be read in the course of a month, including the author’s own reflections upon Patrick’s use of Scripture, and songs from the Carmina Gadelica.

It is the author’s contention that Patrick can be fairly understood as A Celtic Charismatic, in his commitment to Scripture, his emphasis upon mission and in a lifestyle directed and empowered by the Holy Spirit.
This book is intended as a conversation-starter, perhaps mostly with the Christians of Ireland, towards the recovery of a vital faith and vigorous response to the challenges of our day.
“He who wants can laugh and jeer, but I shall not keep silent nor keep hidden the signs and wonders which have been shown to me by the Lord…”

Writing on the Greatest Show on Earth

All human life is here - from a Jesus-perspective

Reflections on the Psalms

Revitalizing the Christian imagination through painting, poetry, music, and more